The travel and culinary adventures of a foodie couple 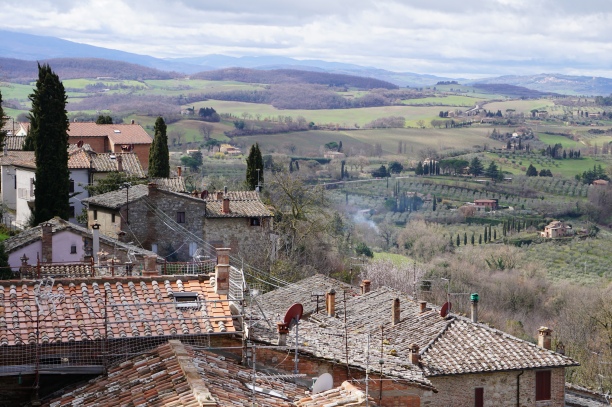 Weather:  We were expecting rain on all 4 days of our trip but thankfully there was no rain in Tuscany and during our food tour. We did have scattered showers, about 5 minutes each, throughout the day on Sunday and Monday. After the heavy rain stopped, the sun came out which created a nice overcast for pretty pictures! The temperature ranged from 55 degrees to 62 degrees during our time there.

Getting Around: Walking around Rome was definitely the best way to truly see what the city has to offer. However, when it was pouring or we were tired, we ended up taking the train, bus, or used Uber.

The trains and buses are very convenient and affordable in Rome.  A ticket that expires after 100 minutes cost us 1.50 EUROS one way.  We took the train a few times throughout our trip and took a bus to the areas where the train did not take us to. We also took Uber two times during our trip because we were not near a taxi stand or a train line. However, Uber here is pretty pricey and they only have Uber Black. We didn’t take a cab on this trip but if you do choose to take a cab, be sure to wait for a cab at one of the designated taxi stands which you can find readily around town.

To and from the airport: To get from the Fiumicino airport to the center of Rome at Termini station, we took the Leonardo Express train, which brought us to the city center in just 30 minutes. One way cost us 14 EUROS each, which was cheaper than an Uber or a cab. Just be sure to valid the tickets prior to boarding! The station has ticket machines where you insert your ticket for validation.

Food Scene:  Pizza, pasta, gelato, wine.. all of our favorite things! We had a lot of Cacio e Pepe, grew to love artichokes, and took every opportunity to have as much pizza as we possibly could fit into our tummies. Wine is about 5 EUROS a glass and they also have a cool craft beer scene. The Romans eat relatively late and have apertivo, sort of like a happy hour, before dinner around 6-7PM. For about 10 EUROS, you choose a drink and then you can eat as much as you want from spread of small bites they set up at the bar. YES THIS IS REAL!!!

Tips: We were told that 15-20% tips were not expected in Rome. We weren’t sure but we still tipped a little bit sometimes and rounded to the nearest dollar.

After landing, we took the Leonardo Express train from Fiucimo Airport to Termini Station and then walked about 15 minutes to our Air B n B, which was located in the neighborhood called Monti. Monti was a great area to stay in- lots of restaurants, bars, and close to public transportation.  Of course we had to make our first meal in Italy…PASTA!!!

We went to Pasta Chef, which was just around the corner of where our Air b n b was. We had the tonnarelli alla carbonara and rigatoni alla matriciana. Both had pork and pecorino cheese but the carbonara had egg and the matriciana had tomatoes.

After settling down, we made our way to our food tour at Trastevere. We were able to get 10% off our tour by subscribing to A Taste for Travel Blog.

During the food tour, we learned a lot about Roman food and local life and had so much yummy food and wine! If we had to choose the top 3, the suppli from I Suppli, the lean pork Mazio style with apple puree and celeriac which is pork shoulder cooked in red wine with apple, onion, honey, vinegar and spices from Spirito di Vino, and the pastries from Innocenti  (see pics below) 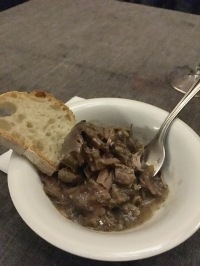 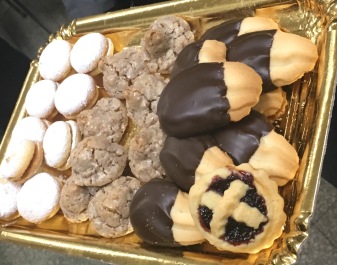 We woke up early and headed over to Villa Borghese to check out the Pincio Promenade, before meeting our tour at the Piazza del Popolo. We didn’t get too far into the park, but the promenade allowed us to see beautiful views!

We then met up to embark on our tour and wine tasting trip with City Wonders to Tuscany.

We highly recommend this tour! We saw some beautiful landscapes and hill towns of Montepulciano, Montalcino, Pienza, and visited the gorgeous Sant’Antimo Abbey, and tasted different Italian wines, including one of the most popular, Brunello di Montalcino!

After our tour, we indulged in Apertivo (which I mentioned about in the beginning of this post), where we ordered drinks and were welcomed to an unlimited buffet of small bites at the bar at ‘Gusto.

On our walk back home, we stopped by the Spanish Steps and Trevi Fountain which were still crowded even 10PM at night! 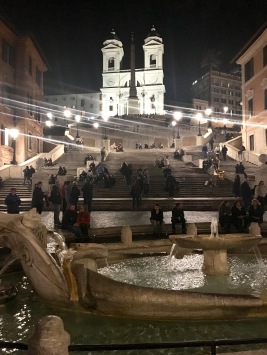 After our Apertivo, we went to eat dinner at La Taverna dei Fori Imperali where I had the best thing I had in Rome.. Gricia- “noodles with roman bacon Guaniciale, pecorino romano cheese, and zucchini. Everything about was amazing. The pasta was cooked perfectly and the combination of the saltiness from the Guanicale and pecorino romano cheese was balanced well with the zucchini.

We made our way to the Colosseum and Roman Forum for a walking tour starting with the Colosseum first. We read on other blogs and heard from friends who have visited Rome that the line is extremely long and it’s crowded so we opt to book a tour to skip the line. It was very packed indeed, and we were in a group of 15 people, and each had a radio and headset to listen to the tour guide because it was just that crowded! 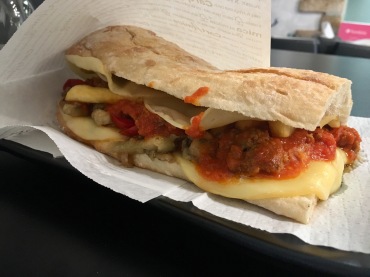 After our satisfying meal we took the train to Vatican City. The museums were closed since it was Sunday but we were able to see the breathtaking St Peter’s Bascilla.

After that we walked to Pizzarium Bonci, the popular pizza joint known for it’s adventurous and loaded toppings. Be sure to take a number and wait for your number to be called to order!

After a few hours, we then went to a nearby restaurant called Al Tre Scalini. I usually don’t eat prosciutto that often but this one was so good I couldn’t resist! We also had ravioli with artichoke. We never really cared for artichoke prior to coming to Italy but after all the amazing dishes we had with artichoke in it, it’s safe to say that we now love it!

What I really liked about this place is that it their menu has vegan, vegetarian, and gluten free options, so those with these food preferences or allergies can enjoy the food as well!

It was our last day in Italy so we tried to pack as much as we could in our schedule! Because we had to check out of our air b n b in the morning, we brought our bags to Termini Station to leave there. In the station, there is a drop luggage area but the line was so long we waited almost an hour and still did not get called. So we went across the street with no line and dropped it off there! It was quick and easy we highly recommend this place Capital Luggage Deposit – Termini Station Luggage Storage if you need to drop your luggage off.

We then headed to the Pantheon and Largo di Torre Argentina, where we visited the wonderful cat sanctuary. 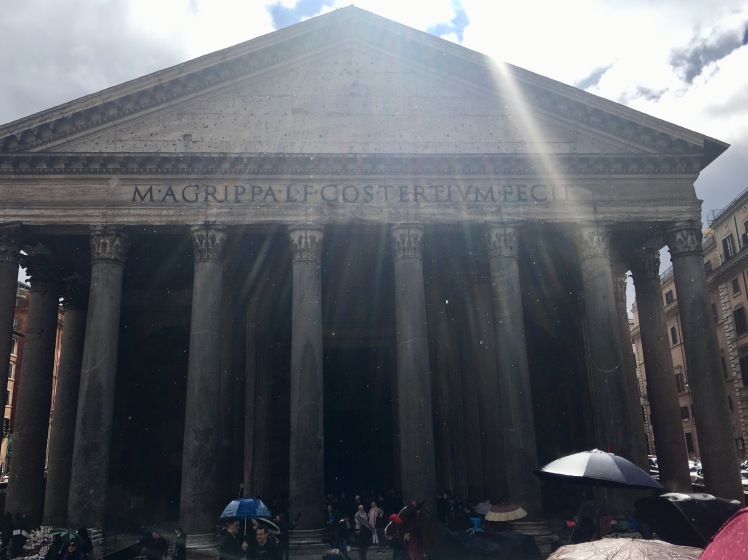 We then headed to the Campo di Fiori market where we saw plentiful bounty of our new found love, artichokes! We then headed to Forno Campo de Fiori, a bakery and also pizzeria, where we had pizza Bianca and pizza topped with mushrooms. The crust was amazing, thin and flaky and highly addictive… 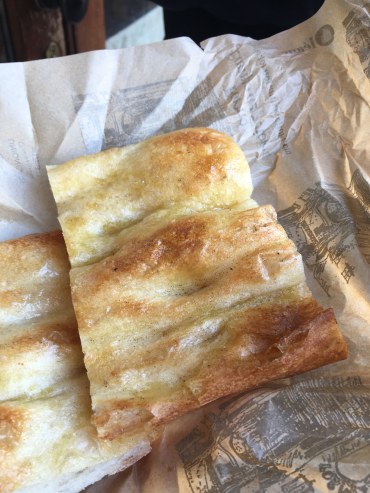 We then went to have our last meal at Hosteria Grappolo d’oro and had caccio e pepe and carbonara ! 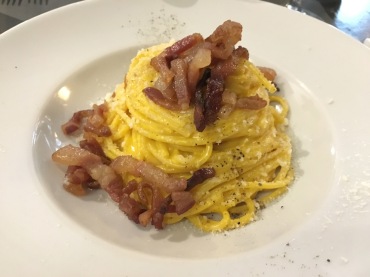 We ended our trip with the most amazing gelato from Giolotti! You have to pay in the front then you bring the ticket to pick out which flavors you want. We chose pistachio (my favorite) and amaretto, and both were so amazing!

Andddd that sums up our trip to Italy! I can say with confidence that we were definitely ate very well in Italy and did not eat Italian food in the states for 2 months after this!

Hi there! We are Joanna and Alan, a food-loving couple who loves to discover the world through travel and good food. In this blog, we share our culinary and travel experiences to help others plan their next (foodie) adventure. Enjoy! 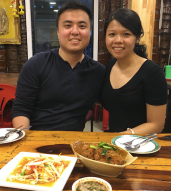