The travel and culinary adventures of a foodie couple

Weather: Much more enjoyable than Bangkok, less humid and no rain, usually around the mid 70s-80s. For the majority of the time, it was cloudy with some sun here and there.

Getting around: After getting off the plane, we had a very smooth transition off the plane and into a cab. The airport has a very efficient system for getting a cab. You are assigned a number and you wait your turn and you let the clerk know beforehand where you are going so they can explain it to the cab driver. Again, iTranslate app and TripAdvisor came in handy for translation. Luckily we were staying at a well-known hotel (We found it through a tour) so we did not have a problem. Overall, the cab fares are less than in Bangkok. There wasn’t uber during the time we were there but I have been notified that it has launched there now. I learned from some travel blogs that there is an app called Grab that is like Uber that is available there but for some reason it didn’t work on my phone..

Food Scene: Overall, the price of food in Chiang Mai in the local areas are mostly around the same as in Bangkok and slightly cheaper than in tourist spots in Bangkok. There are coffee shops are everywhere! They have the same amazing food but fewer street vendors that were close by to us. We went to mostly restaurants to eat and had some snacks here and there.

Day 1: We landed in the morning and checked into our hotel (The Imperial Mae Ping hotel) and ventured around the area to find some food.. which happened to be right across the street, score! Here is where we sat down at a restaurant with no English words (we later found out on google maps that the restaurant is called Pa Phai Noodles) and asked us if we wanted pork, chicken, or beef and a couple of minutes later, we had two large bowls of boat noodles in our faces! After lunch, we waited at our hotel for Day 1 of our 3 Day Lanna Tour that we booked through Travel hub Chiang Mai . We were picked up from our hotel and our first stop was a White Hmong hill tribe village. We learned a lot about the tribes in Chiang Mai and visited some more the next few days. At the White Hmong village, they sell souvenirs to tourists as a source of income (pictured below).

After visiting the tribe, we went on our drive up to the mountains to Doi Suthep Temple, probably the most well-known temple in Chiang Mai. There were a lot of stairs to walk up, but luckily there was an elevator to get us up there! It was beautiful and because it was on top of the mountains, we had a stunning view of the city. 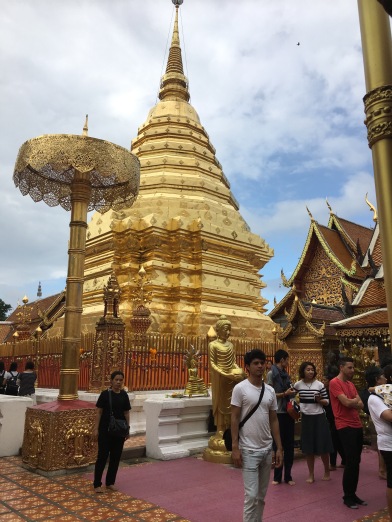 After our visit to the temple, we went to a Khantoke Dinner at the Old Chiang Mai Cultural Center. We really enjoyed this experience!! Several cities in Northern Thailand used to be their own separate kingdom called The Lanna Kingdom, and Chiang Mai was one of the them. We had a traditional Khantoke Lanna Dinner, where we were served food in large round platters at low tables while sitting down cross-legged on the floor. The food consists of sticky rice, which you hold in your hand and stuff the rice with the items given on the platter. As we were eating, there were cultural dances that were performed including a Thai Finger Dance and a Thai Sword Dance. It was a very cool experience! 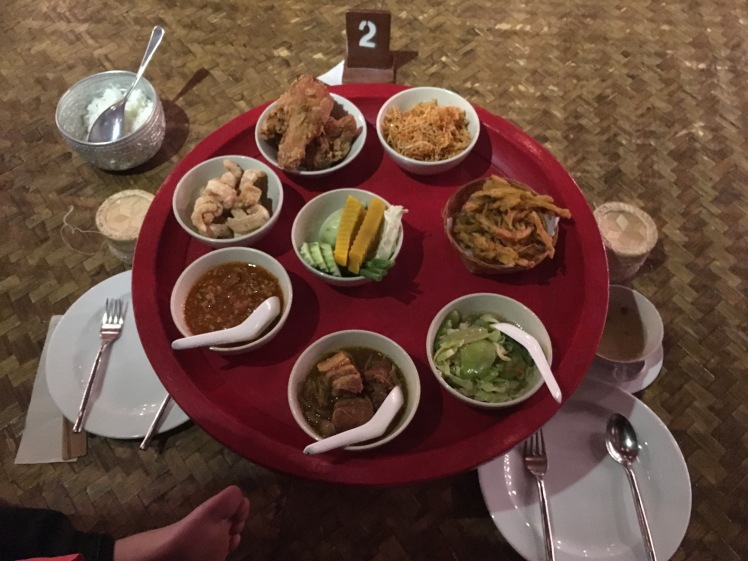 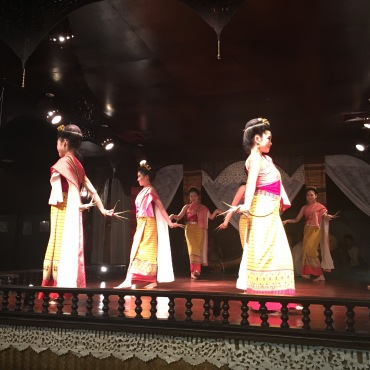 Day 2: We started our day pretty early since we had a long day planned ahead for our tour. We were picked up from our hotel and first went to visit Maekhajan hot springs. It was more of a touristy area and the springs were pretty small. We found some cheap souvenirs here and of course, started our day off with some Thai coffee!

After our visit to the hot springs, we got into the van and headed towards Chiang Rai, a city in northern Thailand. We visited the temple Wat Rong Khun, also known as the White Temple. It was absolutely gorgeous and also completely different from all the other temples that we visited. It is designed and owned by the artist Chalermchai Kositpipat.

The intricate details and design of the temple were impressive. It is definitely a place one must visit if you are in Chiang Rai!

Before we headed to our next destination, we decided to stop by for a little taste of Chiang Rai. We had to try one a popular dish in Northern Thailand, Khao Soi. It is a coconut curry with egg noodles, and topped with crispy egg noodles. It was delish!!

After our yummy bowl of noodles, we then headed to the Golden Triangle, one of the main areas used to produce opium before it was made illegal.  It was cool to see three countries at one spot- Myanmar, Laos and Thailand. We were even able to get on a little boat to visit Laos, where we drank their “welcome drink,” cobra, scorpion, turtle whiskey! And nope, I did not try any of it..

We then drove further up until we reached the most northern part of Thailand and were able to see Myanmar! 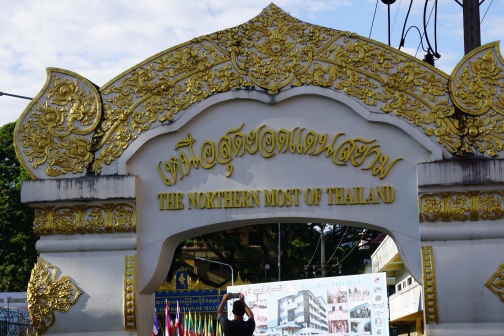 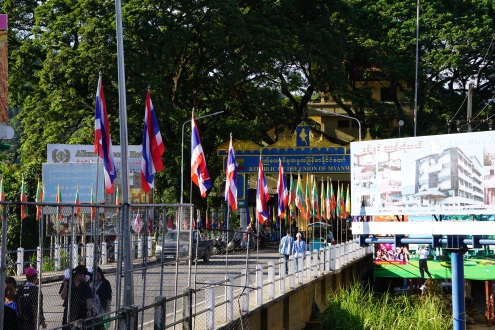 We then headed to visit the Karen Long Neck tribe. We learned about them when we were in school, I remember them because of their rings around their necks. The visit was truly an eye- opening experience since we did not know too much about the tribe at that time. Many people of the Karen Long Neck tribe fled to Thailand from Burma to escape. However, they are not allowed to work in Thailand since they are not actually citizens of Thailand. Because the women wear the rings around their necks, even if they were to go to Thailand to work, they would immediately be noticed and not be allowed to work. Because of this, they have to sell goods to tourists for income. There are conflicting feelings about visiting the tribe, for some people think that the women continue putting the rings on their necks to attract tourists because it is their only source of income. Many people question if it is ethical to come to visit them and “see” them as if they are a show or an exhibit. I still have mixed feelings about this but if you don’t visit them and buy from their shops, they have no income…

After our long day, we tried to visit the Chiang Mai night bazaar but because it was on a weekday and it was a little bit late, there weren’t that many stores opened. It was nice to see all the shops though!

For dinner, we went to Lemongrass Thai Cuisine, which was nearby. We had some delish Pad Kee Mao (Drunken Noodle) and another round of khao soi (curry noodle soup)! The noodles in the pad kee mao were much thinner and smoother than the ones I am used to.

Day 3: On our last day of our trip, we went to visit an elephant safari, Maetaman Elephant Camp. Here, we took saw an elephant show (they know how to paint!), rode on an elephant, and did some ox-carting. The elephants were super cute and we took pictures with them but we did notice that this definitely wasn’t an elephant sanctuary. We were also a little bothered by how they treated the ox while we were ox-carting. I think if we could choose, we would have rather gone to a sanctuary versus a place for elephant riding. 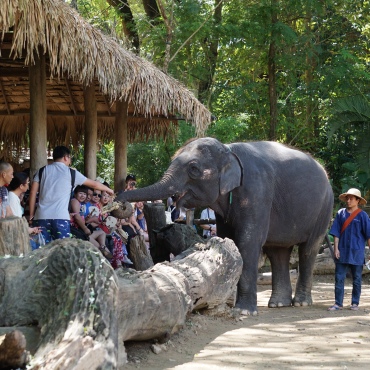 Afterwards, we went to an orchid and butterfly farm which wasn’t our favorite. It seemed that we were there to waste time, no one spoke to us about anything and just dropped us off there. However, we saw some pretty orchids!

After we got dropped off and at our hotel and headed to the airport back to Bangkok for some more adventures. Overall we loved our time in Chiang Mai and definitely missed the weather after getting back to Bangkok!

Hi there! We are Joanna and Alan, a food-loving couple who loves to discover the world through travel and good food. In this blog, we share our culinary and travel experiences to help others plan their next (foodie) adventure. Enjoy!